Brief history of the Illawarra Greens

by Helen Wilson, March 2022 (with thanks to Karla Sperling)

The Illawarra Greens (IG) was established in 1989. The instigator was psychologist Steve Brigham (now deceased), who ran as a candidate for Cunningham in the federal election of 1990. We were one of the early NSW groups formed in NSW, along with two in Sydney, one on the North Coast and one in Newcastle.

Greens NSW was formed in 1991 by amalgamating the local groups into the flat federated structure that continues to distinguish NSW from the other state parties that were forming. Along with the Tasmanian and Queensland parties, they formed the Australian Greens in 1992. Steve Brigham was a key player in both processes. 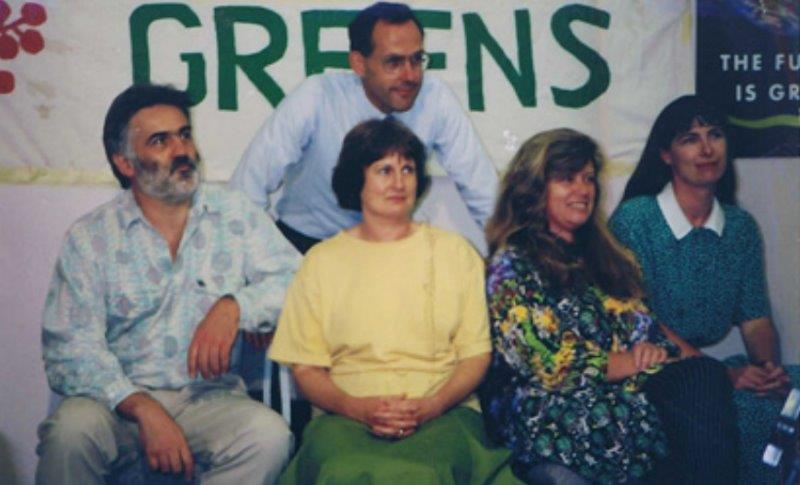 Lawyer and activist Karla Sperling joined the small group in 1992 and was its candidate for Throsby in the 1993 election, the first where the Australian Greens stood candidates. She was to become NSW's lead senate candidate in the 1996 election, where Bob Brown was the first Green elected to the federal senate. She remained active in the group for many years. 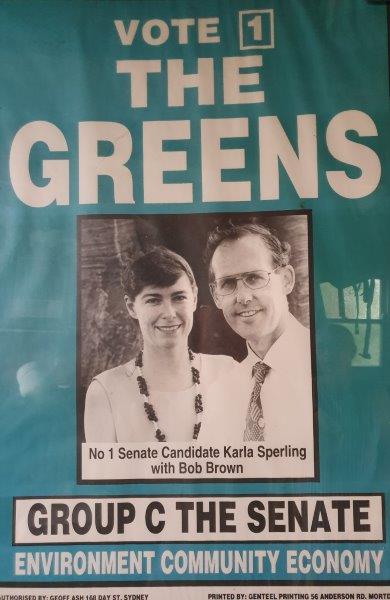 While focusing its electoral efforts on federal elections, the group also concentrated on local issues, particularly supporting community campaigns such as the Illawarra Escarpment Coalition's fight for environmental protection of the unique backdrop to the city, and Illawarra Residents against Toxic Environments (IRATE) efforts to close the highly polluting copper smelter in Port Kembla. Continuing the tradition of Bob Brown and the Tasmanian Greens, IG also supported campaigns to save the south coast forests. Will Douglas was the group's major forest campaigner; he later moved to Eurobodalla.

Karla remembers signing up an enthusiastic young Mithra Cox at the Jamberoo Folk Festival in 1999. Mithra says 'I had initially joined the Labor party at the age of 16 when Paul Keating lost to John Howard. But that was a short lived and depressing experience, and I left within a year and started handing out at election time for the Greens with my dad.' She is now in her second term as a Greens councillor on Wollongong Council.

Her fellow councillor Cath Blakey also joined as a student. She was involved in the Environment Collective at UOW but aware that the environment movement needed a parliamentary voice. She helped set up a Young Greens group that supported various causes.

National events such as the seizing of the Tampa container vessel that had rescued many asylum seekers in distress in 2001 fostered continued opposition to the Howard government.  More people were joining the Greens as they were dismayed at Labor's lack of opposition. 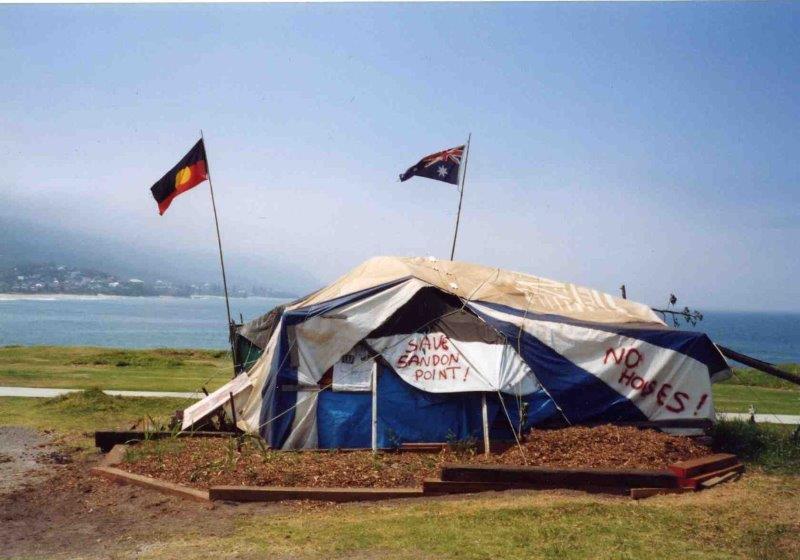 Amidst general dissatisfaction with Wollongong Council and its culture of cronyism, the sale and approval of environmentally and culturally significant coastal land at Sandon Point was causing community outrage by 2000. An Aboriginal tent embassy was established in 2000 and a community picket in 2001. IG were outspoken in support of both. 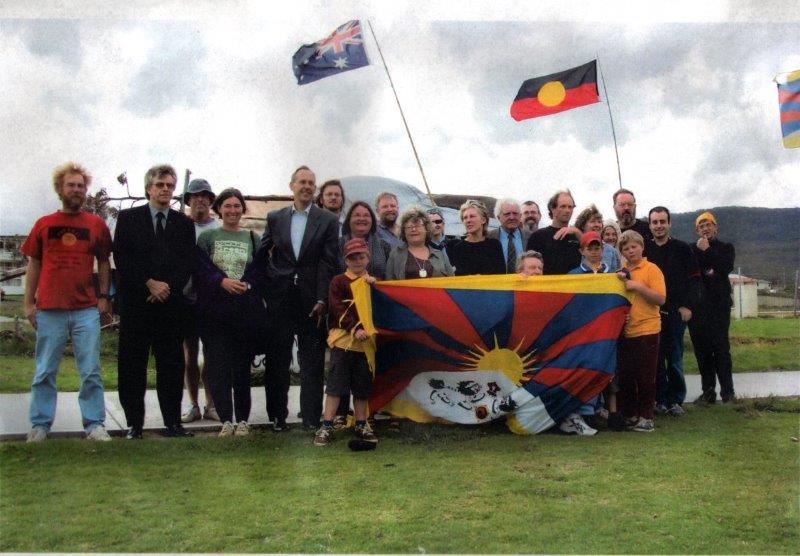 In 2002 the city's mayor had resigned and there was a byelection for the position. The IG decided they should run a candidate for mayor, and prominent Sandon Point campaigner and UOW archivist Michael Organ was asked to stand. Within weeks the local ALP federal member for Cunningham Steve Martin also resigned and another byelection was called. The ALP parachuted in the new candidate Sharon Bird. Michael was again the Greens candidate and his mayoral campaign merged into a federal one.

First Green in House of Representatives

Elizabeth Perey ran a bookshop in the city and was a good networker, able to gather a crowd at short notice. The media gave good coverage, especially when Bob Brown visited to give support. Karla recalls that he said to the small campaign group 'we can win this', and their confidence grew. The stars aligned for the Greens. There was no Liberal candidate, but two independents: one conservative and one with union support. Ian Miles negotiated both of their preferences for the Greens.

For the first time the party had hired an office space in the city where the election night party celebrated Michael's win. It was a turning point for the group and the wider party, the first time a Greens MP had been elected to the federal lower house where he raised many local and national issues. We were proud to see him, with his fellow Greens parliamentarians Bob Brown and Kerry Nettle, supporting the Guantanamo Bay detainees during George Bush's visit. 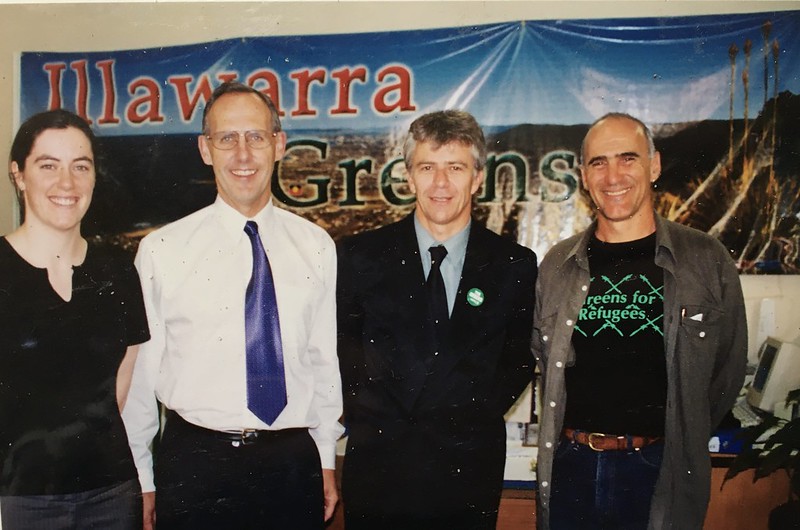 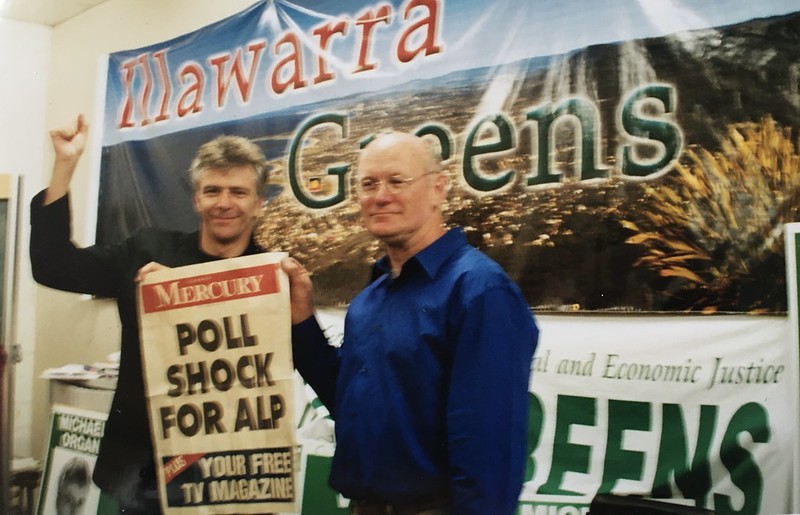 Membership grew during the campaign and Michael's tenure in Canberra, but we were disappointed that the ALP, shocked at their loss on 02, managed to regain the seat in 04. The Illawarra has always been Labor heartland.

There was a series of enthusiastic campaigns for local, state and federal government throughout the 2000s. Michael Sergeant received nearly 20% of the vote in Keira in 2003, a result which has not yet been exceeded in a state election or any federal election after 2004.

The Illawarra Greens had not stood ward candidates in local government elections until 2003 in the belief that it was better to support the independent Active Community Team. The party didn't have further electoral success until the local government campaign ward system was changed after a period when Wollongong Council was in administration following its sacking in 2006. 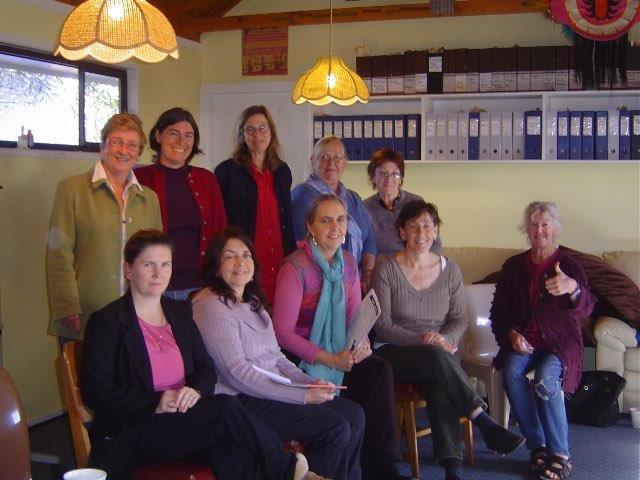 Illustration 7 Lee Rhiannon and the Greens women's workshop, Wollongong, May 2006

State elections require us to manage four candidates and electorates. The year 2007 was challenging as there was both a state and federal election, with two different rented offices. 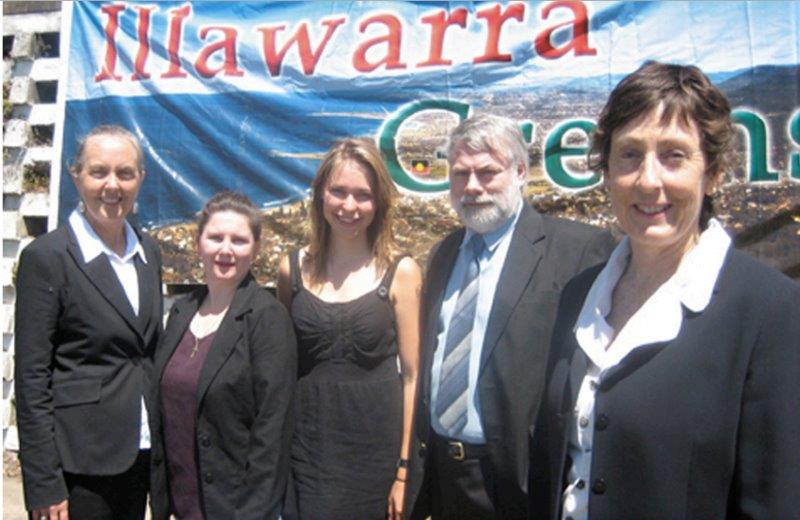 The 2007 federal election was exciting as Kevin Rudd became Prime Minister and John Howard lost his seat. We made good use of an advantageous office site opposite Wollongong station and there was a particular effort to attract Green votes for the Senate. Unfortunately Kerry Nettle lost her seat and NSW was unrepresented in federal parliament. 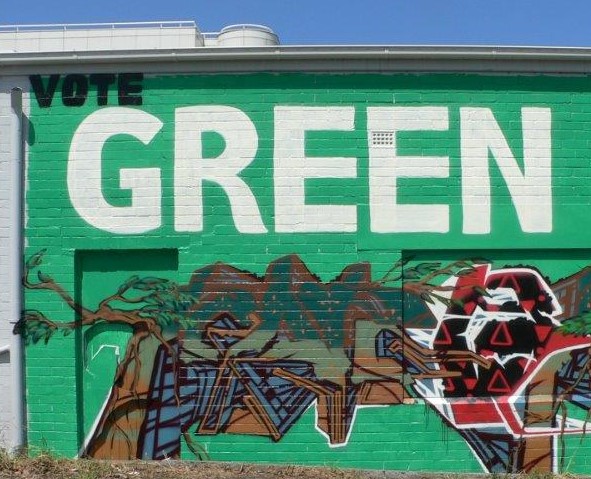 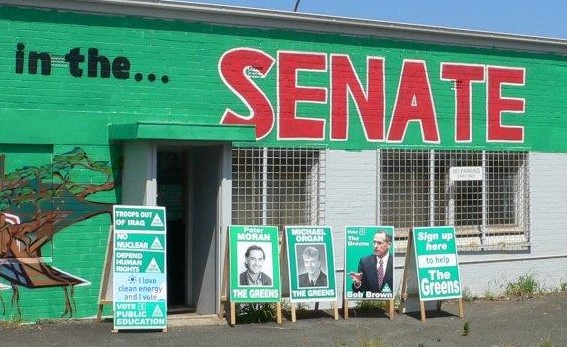 The rising public concern with carbon emissions led to campaigns against mining explorations and expansions. This has been a difficult area to negotiate, as the group had always had a cordial relationship with the South Coast Labor Council. The SCLC have been worried about potential job losses in mining and particularly ongoing threats to the steelworks in Port Kembla. State MPs Lee Rhiannon and John Kaye and later others would often visit to help us strategise. We began to support local campaigns against mine expansions. 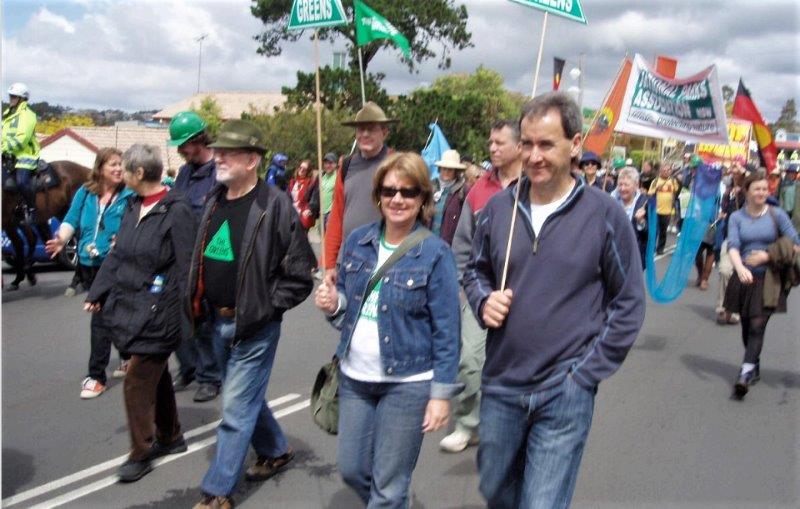 In 2011 two Greens councillors were elected for the first time. Both Jill Merrin and George Takacs had been candidates many times and both were well-established community campaigners. Jill had been prominent in the Sandon Point campaign and had worked for environmental organisations. George was a physics academic with increasing concerns about climate change and mining. They worked with some success for Council to take greater action on environmental protection, sustainability and climate mitigation. 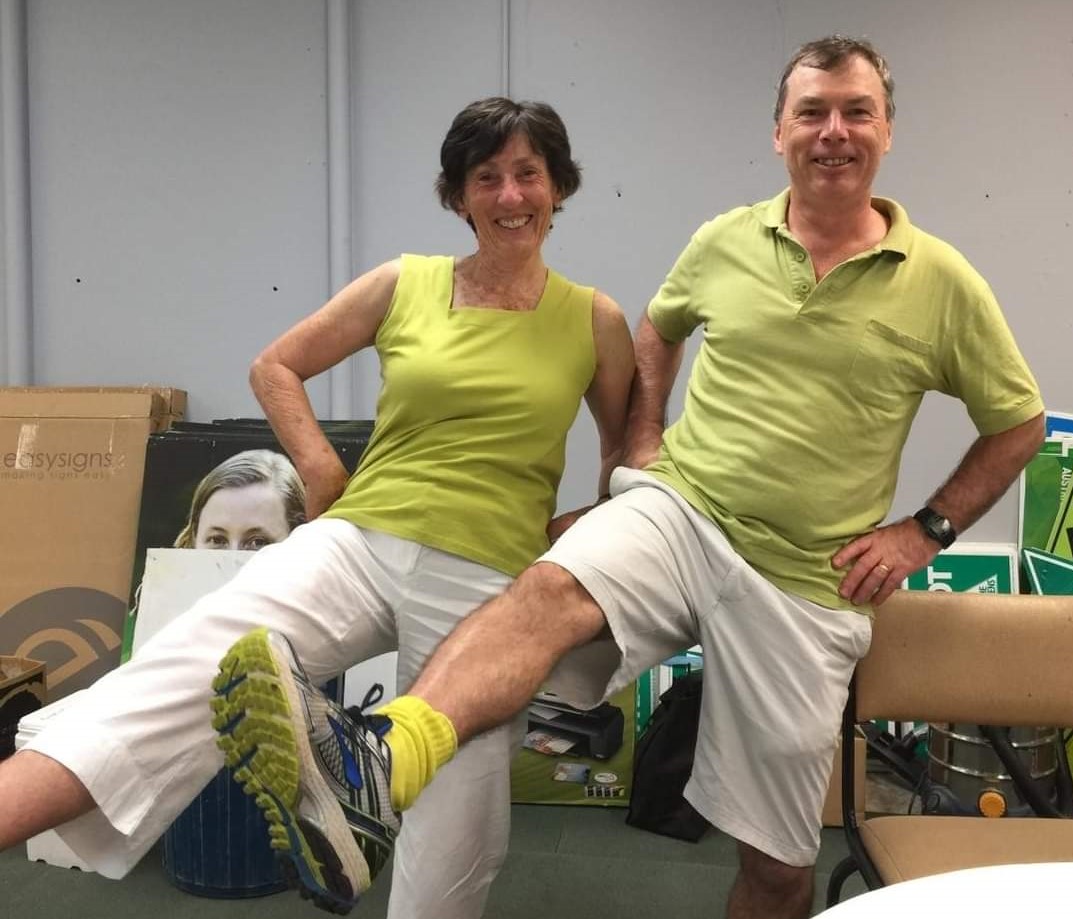 Peter Moran had been a Greens candidate in many state and federal elections for the southern electorates of Shellharbour and Throsby. He served two terms as an independent councillor on Shellharbour Council.

Our candidates have defended the plan to create a Maldon-Dombarton rail line as an alternative route over the escarpment and a way to get troublesome freight trucks off the roads. Though there are environmental costs, we've been frustrated that this project has never received more than token support from governments.

For the 2015 state election we rented a former bus depot as an office and hired Mithra Cox as campaign assistant.

In 2015 the SCLC launched a steel campaign and John Kaye proposed a motion of support for the steel industry to the GNSW State Delegates Council (SDC). This was passed although some environmentally focused delegates had misgivings about it, arguing that protecting Sydney's water catchment was much more important. This continues to be a delicate balance with successive anti-mining campaigns as steel requires coal and locally mined coal is highly suitable. We had a lot of local support for John's bill to parliament, which was passed in the Legislative Council in 2016, after his untimely death. 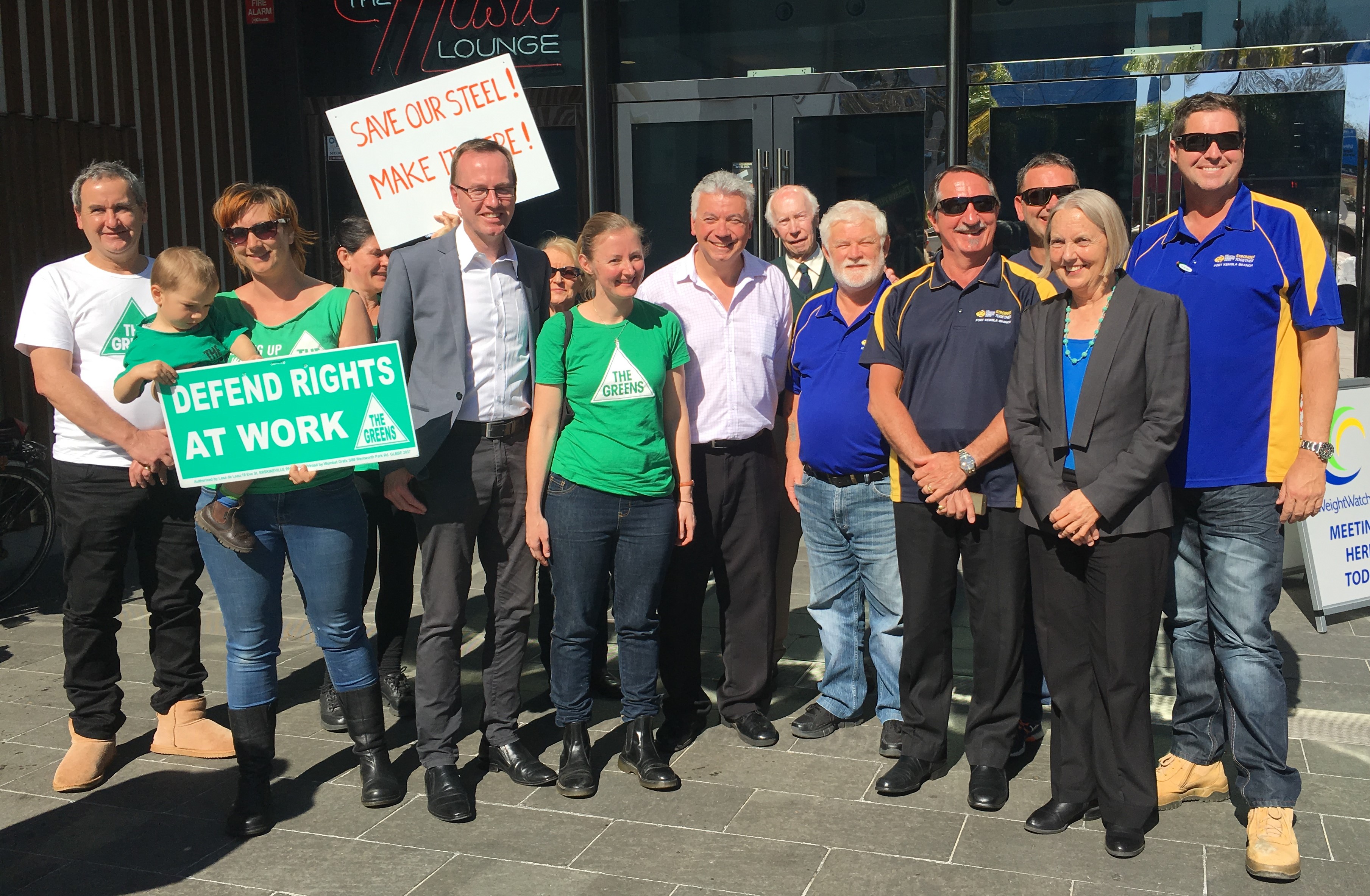 Illustration 13 Greens and unionists combine to save the steel industry

Member for Wollongong Noreen Hay resigned in 2016 and Cath Blakey was our candidate for the byelection and the following federal election. 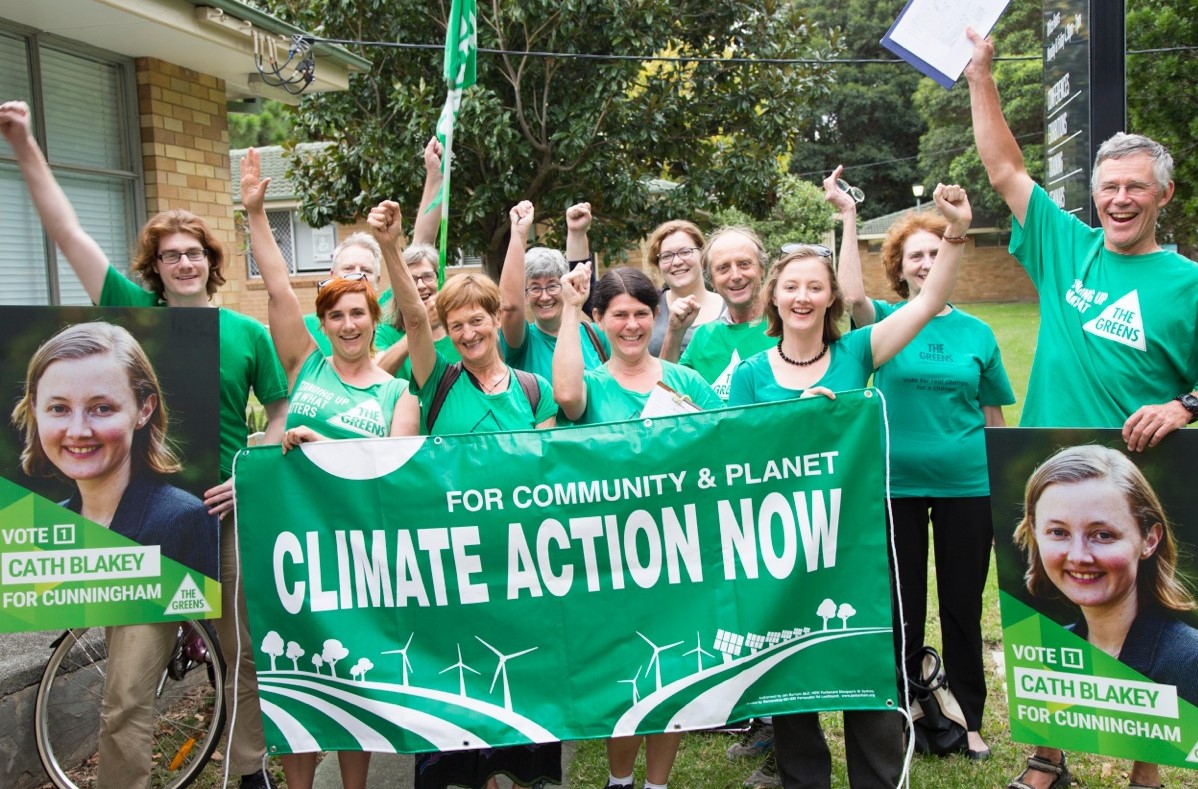 Cath and Mithra were elected as Wollongong councillors in 2016. They built on George and Jill's legacy and brought new strengths as women with young families and wide social connections. They have successfully advocated for better cycleways, more footpaths, emissions reduction targets and for the Food Organics Garden Organics (FOGO) waste reduction scheme to be rolled out across the city. Mithra is a musician and also defends the arts and the need for creativity and fun. They have often fronted the group's involvement in climate actions. 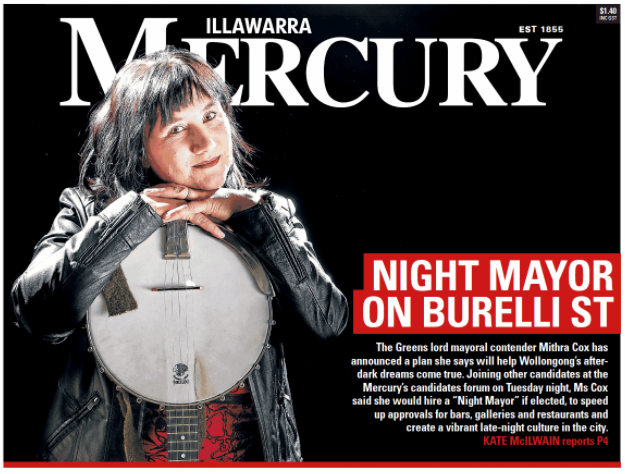 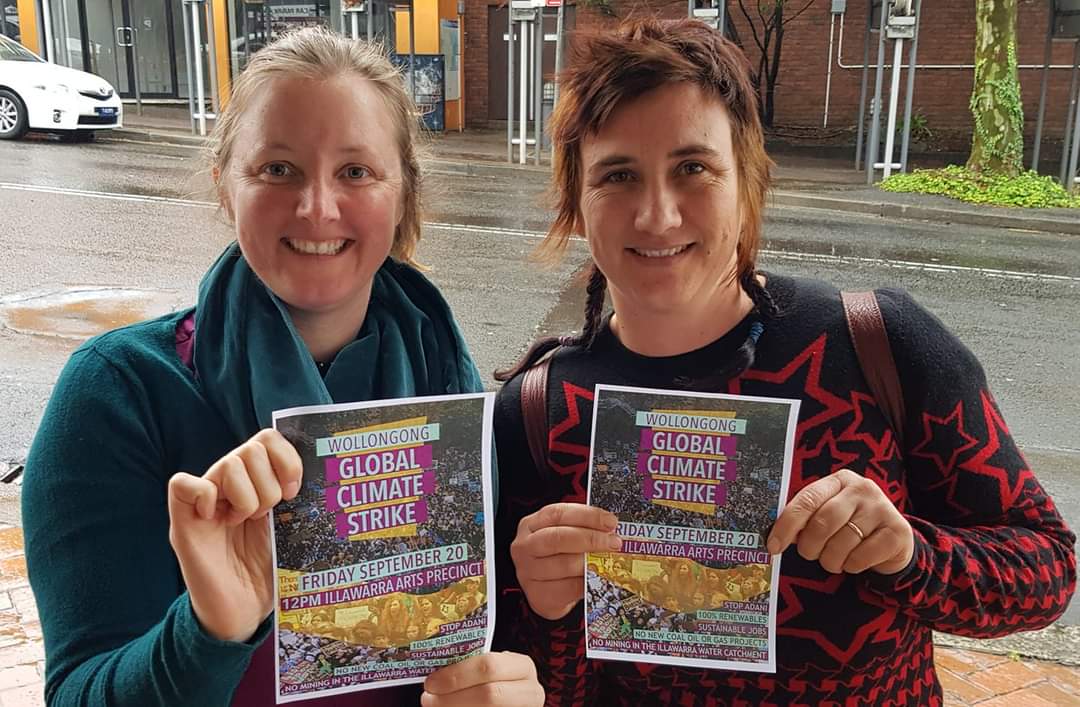 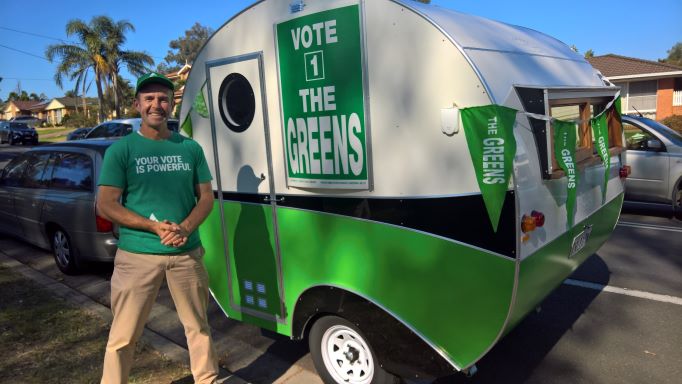 The 2021 local government elections were delayed twice due to COVID. Unfortunately, despite everyone's best efforts, we were unsuccessful in getting a councillor elected in the southern Ward 3. However Mithra and Cath continue to increase their vote and were comfortably re-elected. With great people representing us and no end of challenges to deal with, our group continues to grow and get stronger. We care passionately about making Wollongong a greener city. 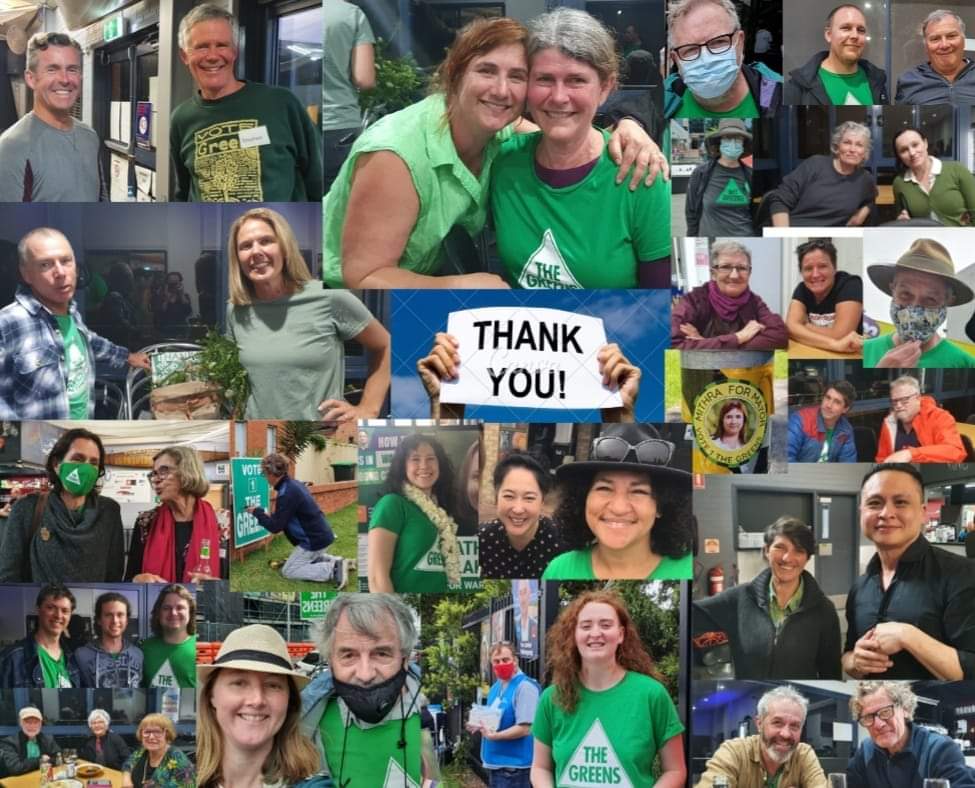