On Monday, Wollongong's councillors were due to set a target for the city to be carbon neutral by 2050 and reduce emissions by 2.7 per cent each year in the meantime. This would have helped to stretch out the city's remaining carbon budget - which will run out in 18 years with no action - and triggered development of an "emissions target reduction plan" in consultation with residents and industry.

However, after a long debate - which included questions from some councillors over whether humans are causing climate change - the majority, led by Labor councillor David Brown, voted that the target should be "deferred" pending an earlier round of consultation.

Wollongong will now miss the deadline for setting an emissions target under its 2017 agreement with the Global Covenant of Mayors for Climate and Energy; it was required to set a "science-derived" target by August/September.

Greens Councillor Mithra Cox voted against the deferral and said she was saddened and disappointed, especially after thousands of residents took to Wollongong's streets last week to demand action over climate change.

She noted emissions targets had been in development for several years, and that the council had signaled its intention to act on greenhouse emissions by declaring a climate emergency last month.

She said it was "absolutely imperative" the council consult with residents and businesses on developing an action plan for how it would achieve the targets, but that "consulting on these targets undermines the whole thing".

Read the report by Kate McIlwain, The Illawarra Mercury, 24 September 2019

A very thorough report on the management of Lake Illawarra is on public display. Dredging is not a part. But there has been a community push for dredging some parts of Lake Illawarra. This has been met with concern from wetlands scientists.The lake stores carbon in wetland soils helping mitigate climate change, and the scientists fear dredging could disrupt the ecosystem. Greens Councillor Cath Blakey is interviewed.

Posted by Anthea Gupta · September 06, 2019 11:41 AM
Wollongong council will investigate potential changes that can be made to ensure new and renovated buildings will be more energy efficient and produce energy. At Monday night's meeting, Greens councillor Mithra Cox successfully moved that council staff provide a report or briefing to councillors, outlining ways to ensure that all new buildings in the city are energy positive. Energy positive buildings produce more energy than they use.

See the report from 9 News Illawarra,

Ward 1 Greens councillor, Mithra Cox has welcomed a move by fellow Labpr Councillor Ann Martin for Wollongong Council to declare a climate emergency. Cr Cox said that Cr Martin's motion, set to be debated at next Monday night's council meeting, acknowledges the seriousness of the problem and  encouraged other local councils to follow suit.

Cr Cox said while climate change has been "politically polarised for decades", now was the time for all to work together on solutions.

"This is an important motion that acknowledges the seriousness of the problem, and the short time we have left to take serious action," she said. "We don't have decades left to turn this ship around and gradually reduce emissions. We need to act now. This year, this month, today.

Read the article by Agron Latifi in The Illawarra Mercury, 7 August 2019

Wollongong City Council will shake up how residents throw away their household waste. The council will hold a food organics and garden organics trial later this year. FOGO aims to divert food and organic waste from landfill, via the red-lidded bins, and into compost, via the green-lidded bin.

last year the then Greens Ward 3 council candidate, Jamie Dixon, started a petition for a trial of FOGO, and now it is supported by Greens councillors Mithra Cox and Cath Blakey.

A council spokesman said the initiativwould increase the life of the Whytes Gully landfill facility and reduce the amount of greenhouse gases. 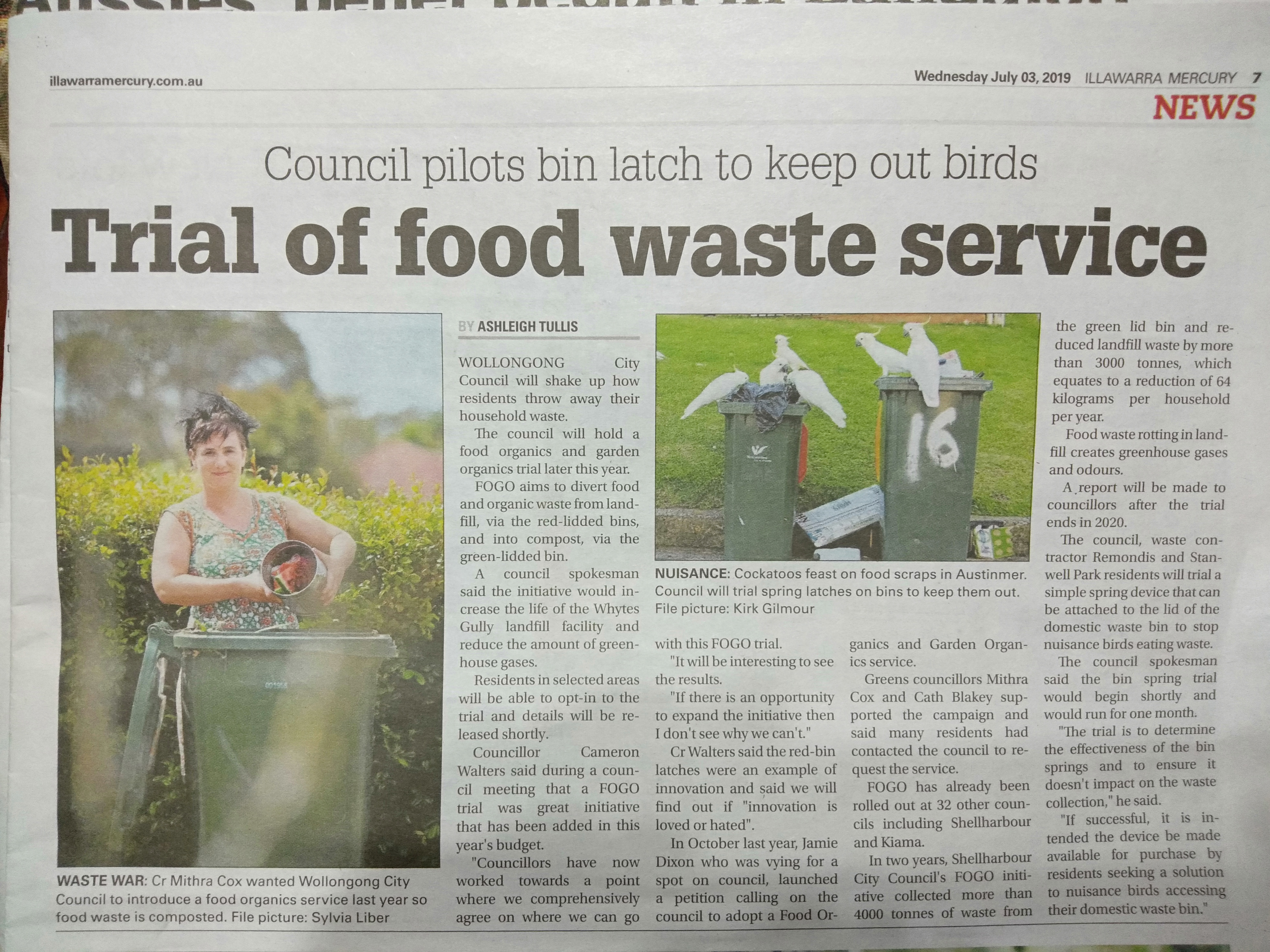 Read the article by Ashleigh Tullis in The Illawarra Mercury, 1 July 2019

More than 15 environment groups join together to protect escarpment

After claiming to have been overlooked during plans for mountain biking on Mt Keira, more than 15 environmental groups have joined forces to ensure the protection of the Illawarra escarpment. The Illawarra Escarpment Alliance includes representatives from the Illawarra Greens, Native Plants Association, National Parks Association of NSW, Illawarra Local Aboriginal Land Council and Illawarra Bird Observers Group.

The groups decided to band together to ensure councils, governments and bodies know who to come to in the early stages of consultation.

Greens Councillor, Cath Blakey was one of the speakers.

Read the article by Glen Humphries in The Illawarra Mercury, 18 June 2019

Watch the report on WIN News

Greens Wollongong councillor Cath Blakey is calling for a halt to sand dune reshaping work at Port Kembla until the council's strategy can be evaluated.  Council spent over $100,000 to clear sand which has now come back. 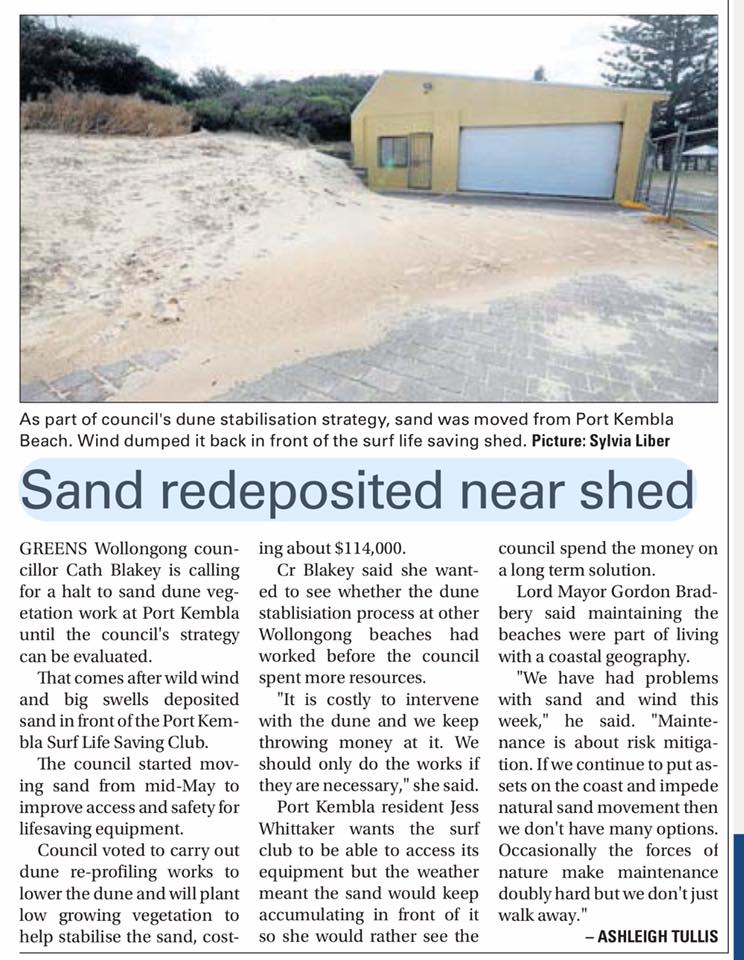 Read the article by Ashleigh Tullis in The Illawarra Mercury, 7 June 2019. 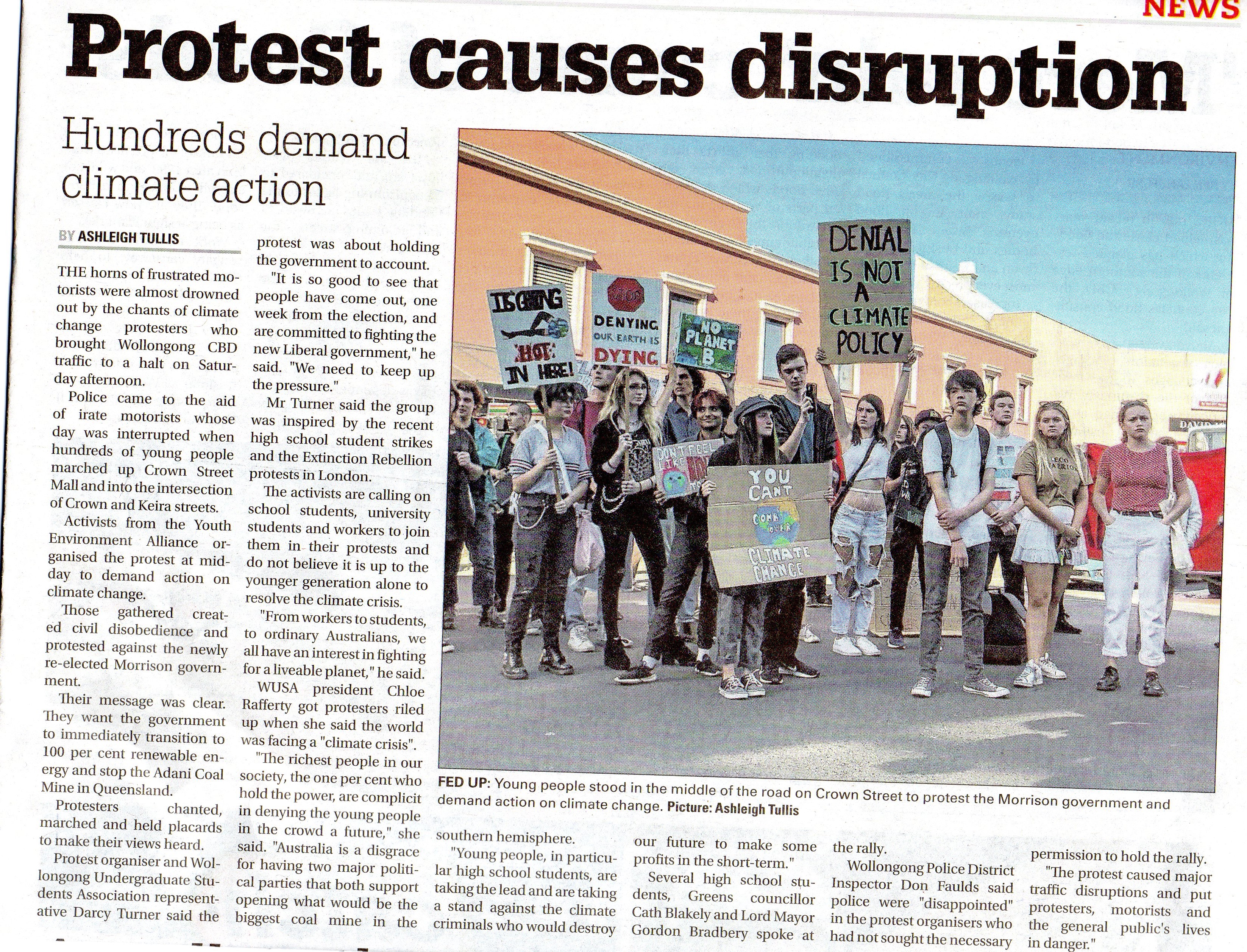 Read the article by Ashleigh Tullis in The Illawarra Mercury, 27 May 2019

Posted by Anthea Gupta · May 28, 2019 5:32 PM
The nature strip in front of your home is often seen as an annoyance that has to be regularly mowed. But one Wollongong councillor wants to see those patches of lawn transformed into beautiful gardens across the city.
Greens Cr Cath Blakey is asking Wollongong City Council to develop guidelines to make it clear to residents what species of trees are and are not acceptable to plant on the land from their private property to the road.

Read the article by Ashleigh Tullis in The Illawarra Mercury, 23 May 2019